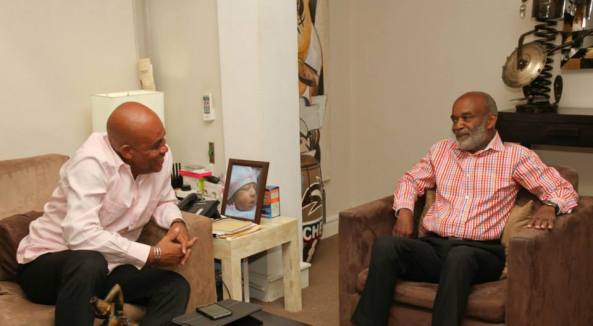 Yitzhak Rabin, the fifth Prime Minister of Israel and Nobel Peace Prize winner, said once: “You don’t make peace with friends. You make it with very unsavory enemies.”

He was assassinated in office in 1995 because of the Oslo Accords, the blueprint of peace in the Israelo-Palestinian conflict, which he signed with his Palestinian neighbors –he wanted to make peace with the Palestinians.

Today, each time I think of the political conjuncture in my homeland Haiti, this great quote of Prime Minister Rabin cannot stop roaming through my mind. He was, like many other world leaders, a champion for peace. That is why he was awarded with the Nobel Peace Prize in 1994 –a year before his assassination.

For quite some time now, President Martelly, in his attempt to find a concerted and agreeable solution to the situation of standstill the country is in today, has initiated a series of meetings or consultations with political leaders, respectable and nationally renowned personalities in the civil society, professionals, members of the clergy, members of the press, etc. Unfortunately, not all seem to fall in line with his action as evidenced by this Nouvelliste article entitled Quand Moise Jean-Charles douche Rene Preval.

Reading the article, I could not stop shaking my head in disbelief. It is very sad and depressing to read what the Lavalas senator thinks of former President Preval’s meeting with President Martelly. To downplay its importance, he sees it as going to the National Palace to participate in the Carnival.

The Lavalas senator is going ballistic and enraged at former President Preval for the simple fact that he went to meet with President Martelly in the National Palace to brainstorm on the country’s sociopolitical conjuncture. Being that he is an experienced former head of state, someone who had dealt with all kinds of challenges during his tenure as president, he went to consult with President Martelly on the road to take to get through the staleness the country is going through right now.

The senator of the Lavalas opposition, Moise Jean-Charles, needs to understand this basic concept: there is no better way to solve contentions and disagreements other than through sincere and honest dialogue. If he knows a better way, he needs to bring it forth. Obviously, he does not; his only way is to see President Martelly, the country’s democratically elected president, ousted.

It is quite obvious that these folks in the Lavalas opposition [for the record, when I say Lavalas opposition, I want to refer to Fanmi Lavalas, Inite, Fusion, MOPOD, RDNP, Ansanm Nou Fo, Ayisyen Pou Ayiti] do not want to see the standstill resolved; they want a chaotic state of affairs.

The Lavalas opposition’s only objective is to see Martelly dragged out of power by any means necessary. And anyone who, like former President Preval, dares meeting with President Martelly –in an attempt to unfreeze or untangle the political stillness –will fall prey in their radar of attack. They don’t see country… they only see their selfish and short-lived personal or party interests.

The more they hold on their intransigence or grudges, the clearer the people will see what they are really after and about.

President Martelly needs to stay resolute and focused; he is doing the right thing. He must not let these Lavalas folks sway him. In fact, they hold no real power to topple his administration. If they had the means to do it, they would have done it by now. They are a bunch of good-for-nothings who can only make empty noises on the streets.

On this day marking the 208th anniversary of the death of Emperor Dessalines, what is a better way to respect and honor the legacy of this great and illustrious figure than to reflect on his philosophy, to penetrate his psyche beyond his death? No, instead, the Lavalas opposition calls for another street protest to demand the ousting of President Martelly. And we all know what this protest will bring behind it. They will put their violent mobs on the streets to physically and psychologically terrorize the population, burn tires, break people’s car windows and steal their belongings, loot private businesses, etc…

Contentions and disagreements can only be resolved through dialogue, not violence. With violence, all of us will lose; there can never be winners. So let us all renounce violence and embrace peace and the philosophy of nonviolence.

Those among us promoting conflict resolutions through violence only show their weakness and incapacity to promote peace, concord, amity and harmony. They are the nation’s true enemies. We need to annihilate them not by means of violence, but by means or rejection. So it is time to reject and refute the Lavalas ideology of violence and racial division to embrace the true Dessalinian philosophy of unity and peace through dialogue, unity and social justice. President Martelly needs to continue with these series of consultations with all the people willing to meet with and talk to him. That is the most productive, progressive and commonsense approach, and I strongly support him in such endeavor.