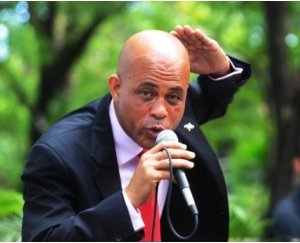 The Haitian political class needs not to be infuriated at Martelly for the warm acclamation he has received from the people. Rather, they need to reexamine themselves to find the problem and fix it.

Martelly “tètkalebobis” should be the least of their worries. Tèt fè mal sa yo genyen an, se pa li ki ba yo l. 😀

They are to be blamed for both phenomena -the Aristide phenomenon and the Martelly phenomenon.

You thought these people would have learned a thing or two from the Aristide experience in the 1990 election, right? Apparently, they had not learned anything.

Aristide, a priest-turned politician, slaughtered his rival, Marc Bazin, the face of the status quo, at the polls. He won the election with an avalanche or “lavalas.” That was then.

Today, here we are on the verge of experiencing an encore presentation of that historic experience.

If Martelly, a musician-turned politician, gets elected president of Haiti in this election scheduled for March 20th, it will be another major blow to our political class of traditional politicians. In fact, it will not be just a blow; it will also be a hot and thick load of spit in their faces.

Some are arguing that in a country where things are being conducted with a certain level of standard, Martelly’s name would have never been on the ballot. Well, neither would have the names of these bozos who have been occupying the political landscape ever since after the collapse of the Duvalier regime in 1986.

Now, in an attempt to prevent such an embarrassment from occurring again, some are proposing that the Haitian Constitution of 1987 be amended to impose restrictions (in terms of education level and political experience) to determine who can run for the presidency in Haiti. This is the most preposterous idea I have ever heard in my lifetime as a political junkie.

The determination as to who is qualified or not to be president should be left to the people to make at the ballot box, not by imposing restrictions on honorable citizens. Such idea is very condescending and elitist to say the list. It is like saying that Al Sharpton, Ross Perot, Donald Trump and Ralph Nader are not qualified to run for president of the United States because they have never been elected to serve in any capacity. This is just ludicrous.

Martelly did not emerge out of some type of a spontaneous generation incident of nature. Another words, “se pa yon kout loray ki te kale l.” He is a response to the failure of that class of politicians. Clean your ranks, then you will never have to worry about another Martelly to become a challenge to the status quo.

Martelly is not to blame for the rejection of these bozos by the people. The people have rejected them for a specific reason, which is that they have never missed the opportunity to fail and embarrass the country; they don’t inspire trust. Until they get their acts together, they’ll always be rejected; we will always have another outsider like Martelly to surprise them again.

5 comments on “MARTELLY IS NOT TO BLAME FOR…”