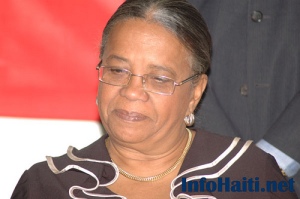 All RDNPists and supporters of Mirlande Manigat, do not say I am not being fair for having given tips to Martelly on how to beat your leader in the next election and not given you anything. This time is yours to be served. This piece is going to give you tips on what to do next going forward.

Let me begin by saying this: if after more than 25 years in the existence of RDNP Mirlande Manigat is the best you guys have to offer, something is not going right inside the party. After this election, the party itself needs to do a soul-searching exercise to fix what needs to be fixed and change the entire Standard Operating Procedure (SOP).

I think Patrice Dumont, had he represented the party in the election, assuming he has a clean record, could have made a better showing than Manigat. Generation wise, he and Martelly fit in the same bracket. He’s a media personality, Martelly is a stage personality. He seems to have a strong education background, which, in my opinion, could have been a major mismatch for Martelly.

With him in the race, the battle could have probably not been waged on the leadership front as it is now with Manigat; but, rather, on who has the best vision for the country.

To be fair, though, Manigat’s plan does sound great ON PAPER. It is so great that I think Martelly is going to have to steal some parts of it. But, if elected, does she have the leadership spine and the iron fist to implement it? The answer is a fat and loud NOOOOOO. She is weak and symbolizes failure. That’s why she is going to lose this race which should have been hers to lose.

After this election, the RDNP party must take some time to redefine and reintroduce itself. You must fire Mirlande Manigat and entrust the leadership of the party with a new generation of leaders with a clear agenda to win control of the presidency and have a strong congressional presence in Congress and mayoral presence all around the country in the next five years. You never know what may happen; I may become a registered RDNPist -with a complete reshuffling and a new leadership, of course.

I bet you are not going to do that; she is going to be kept in her place until she dies or decides to retire. Why should she be asked to relinquish her position? After all, the party is her private property; it will disappear or cease to exist with her death. That’s basically the life expectancy of most political parties in Haiti. They disappear with the death of the founder.

Well, you don’t need to listen to my advice. What do I know? I am a nobody.

3 comments on “WHAT THE RDNP PARTY MUST DO NEXT”