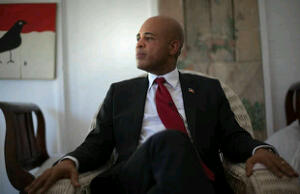 In this article entitled “Attention Danger!!!” published yesterday, Thursday, June 02, 2011 on the Radio Kiskeya website, the author, Lyonel Trouillot, did a tremendous job calling President Martelly out on his issuance of the executive order making Ascension (a Catholic Holiday) a National Holiday. http://www.radiokiskeya.com/spip.php?article7793

The issuance of that executive order was a reckless and miscalculated move on the part of the president. Doing so, he opens the door for people (friends and foes) to question his motives. Many, myself included, tend to assume that, by that decision, he is favoring the Catholic Church over the other religious conglomerates.

There is no question that the president was ill-advised. Whoever advised him to issue that executive order making Ascension a National Holiday has shown lack of democratic judgment; therefore, he or she has no place in the president’s team of advisers. Such decision is an embarrassment, and it is making the president look very bad. What has happened of the basic democratic concept of separation of church and state?

The democratic concept of separation of church and state demands that the state be kept away from matters of faith. As Mr. Trouillot eloquently stated in the piece in corroboration of the aforementioned notion, “The duty of the state and the government is to assure free exercise of religion and atheism by the citizens in their private domains.”

During and after the campaign, Candidate and President-elect Martelly had met many times with many leaders from the Protestant and Catholic communities; not even once, as far as I can recall, has he met with Max Beauvoir, the Ati or Supreme Chief of the Vodou religion. I was very bothered by that. This is suspicious on his part, and he needs to come clean on that.

Vodou, as a religion, had suffered in the past many atrocities from many of our political and Catholic and Protestant leaders. Today, we will not stand by anyone’s action sought purposely or otherwise to ostracize or treat it as a second class religion.

If the president claims to be of a certain faith, that is his business, not that of the state. Therefore, regardless what that faith is, in the exercise of his presidential duty, he needs to separate it from his handling of the affairs of the state.

Haiti is not a theocracy; it is a democracy. So we are calling on President Martelly and his advisers to keep in mind that this executive order has set a bad precedent for our democracy. Please, Mr. President, for the sake of our democracy, keep the state out of matters having to do with faith. This is not what we are paying you for.

8 comments on “PRESIDENT MARTELLY: KEEP THE CHURCH & THE STATE SEPARATED”