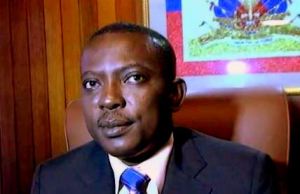 Some people are criticizing the Martelly-Lamothe administration for the creation of the Ministry of Defense. They argue that it is a waste of our scarce resources to have a Defense Ministry as an independent organization of the Haitian government -since we already have an agency called the Direction of Civil Protection, and let alone we do not even have a military institution. I don’t think these folks quite understand the real philosophy behind the creation of the Ministry of Defense, though.

The Ministry of Defense, per Minister Joasil’s strategic approach during his brief presentation of the institution’s mission, purpose, and agenda at the televised Cabinet Meeting on Wednesday, is going to play a very important role, one of an umbrella institution, in coordinating the efforts of many agencies such as the Direction of Civil Protection, the Office of Management of Mount Hospital, the National Intelligence Agency amongst others.

We do not really need to wait for when we have a national military for us to start doing certain things. For example, we can introduce in or add to the national police two well trained and equipped specialized brigades with mission to police our forests (to prevent the rampant deforestation) and man our border with the Dominican Republic (to control the movement of people and goods across the border).  These brigades too, once constituted, along with the aforementioned agencies, will fall right under the commanding authority of the Defense Minister.

I would like to urge these people going ballistic over the creation of the Ministry of Defense, which former Senator Joasil is commissioned to head, to not let the name “Ministry of Defense” throw them off. In my humble opinion, that ministry’s real name should have been Ministry of National Security with mission to coordinate the efforts of all these independent agencies so that they could communicate with each other and act in a concerted manner for effectiveness purposes.

It does make sense to detach the Ministry of Defense from the Interior Ministry. The Ministry of Defense is too vital of an institution to let it stay as a sub-institution inside the Ministry of Interior. From a strategic standpoint, I do understand quite well what President Martelly and Prime Minister Lamothe are trying to do by separating these two entities. If you really want to effectively secure our homeland, you have got to give the Defense Ministry its autonomy and allow it to operate outside the realm of the Interior Ministry. After the tragedy of September 11, here in America, we did the exact same thing with the creation of the Department of Homeland Security (DHS), which Secretary Napolitano is currently the head of. As the new threats and challenges emerge, we have got to keep restructuring government to render it more effective in its mission of delivering “real-time” service to its people.