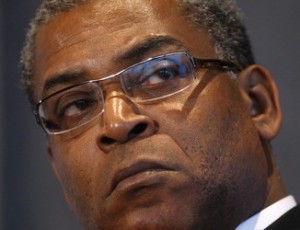 The political landscape in the Haitian legislature, in terms of power distribution and concentration, is looking dull on President Martelly’s side of the spectrum. With no political weight in the Parliament to begin with, it appears very impossible for him to get his choice for Prime Minister ratified -unless he accepts to compromise to pull a majority in the Parliament.

So like President Obama did after he lost the House of Representatives to the Republicans last November, President Martelly must compromise. That’s the political reality of the moment. Now that we know he must compromise, the issue is how he should compromise.

It has been noise in many political circles on the ground in Haiti that President Martelly may be opting for Bellerive to stay as Prime Minister. I strongly oppose to such idea. I hope it is nothing but a rumor, for it will not play well politically for the president.

Keeping Bellerive in his function as Prime Minister is political suicide for Martelly. The president should remember that he campaigned and got elected on the promise to break ties with the corruptive and failed Preval-Bellerive administration.

There is a reason why the people did not elect Preval’s protégé –Jude Celestin. The reason is simple: they did not want a continuity of the failure of the Preval-Bellerive administration. Let us not fool ourselves! Bellerive and Preval are the two sides of the same coin.

The people have already rejected Bellerive and his acolytes, why recycling them? Imagine what would have happened to Obama if the US had the same system of government as Haiti and he had decided to choose Dick Cheney as his Prime Minister. It would have been political suicide for him, would it have not?

We are experiencing Bellerive fatigue; therefore, President Martelly should look the other way.

It is good for the sake of political psychology to have a fresh face in the Prime Minister position, explaining the reason why the Bellerive option has got to be off the table. Such will play in the president’s political best interest in terms of bragging points.

Recycling Bellerive would be like a political capitulation for the president, who had made it clear many times that Bellerive is a bad card -the continuity of the failure of the previous administration. For him to turn around and recycle Bellerive, that will be very bad for him politically speaking. So he must not go with that “bouyon rechofe.”

If I were to advise him, I would honestly convince him to go with Jean Henry Ceant, the former presidential candidate, for the Prime Minister position -just for the sake of compromise.

The question you may be asking is, why Jean Henry Ceant?

Politically speaking, Ceant, whom many see as a disguised Lavalas sympathizer, seems to be a guy who could inspire confidence and trust on both sides of the political fence. He is what you would call a political centrist with a high degree of political commonsense and cleverness. Do you sense what that means? It means that his choice could appeal to a strong majority in the Parliament, which is eminently necessary for him to be ratified.

Furthermore, since he was a presidential candidate in the last contest, I do not think there could be issues with his record -proof of nationality, proof of residency, criminal background, tax document, etc… as required by the Constitution. Those should have already been cleared by the officers of the Provisory Electoral Council (PEC).

I would definitely urge the president to push the Ceant card hard to pass the congressional gridlock. Ceant seems to be a consensus builder. If/when ratified, he will have the mandate to join head with the president to build a hybrid government to represent all the sectors of the nation’s political life in an effort to implement the president’s vision for the country.

This hybrid government will have a clear agenda to execute in a realistic time frame. It will have to:

1. work along with the Interim Commission for the Reconstruction of Haiti (ICRH) to take care of the housing projects for the victims of the earthquake;

2. bring the rampant insecurity under control;

3. revamp our economy by encouraging and/or attracting private investments, developing our sector of tourism, promoting our national production, reforming our agriculture, etc…

Finally, the political conjuncture in Haiti is called for compromise to solve the political stalemate (between the executive and the legislative) the country has been in since the inauguration of President Martelly, who does not have any political leverage do get anything done in the Parliament. President Martelly must compromise, but not compromise at any cost, making the idea of recycling Bellerive unacceptable and unpalatable. So the choice of a centrist in the caliber of former presidential candidate Jean Henry Ceant for the Prime Minister job -to build a consensus and inspire trust and confidence on both sides of the political spectrum -makes plenty of political sense. In all earnest, we are Bellerive fatigued. NO MORE BELLERIVE!!!