You have 3 women at the highest level of our Haitian government -Josette Darguste, Yanick Mezile and Magalie Racine -respectively Minister of Culture, Minister of Women’s Rights and Minister of Youth and Sports, who probably are in their 50s, thinking that they can police behavior in the country. They are trying to tell women how to dress and dance “appropriately” in public festivities.

This is a war they are not going to win because wars against time can never be won; time always comes out victorious.

What these ministers need to be reminded of is that morality cannot be regularized, for what is perceived to be immoral for them may be moral for others. Haiti is not a theocratic state; it is, rather, a secular state. Therefore, they cannot be going around telling people what to wear and how to dance in public. This is absurd.

What is going on in the Haitian society today is what we call in sociology “clash of generations,” which we witness in almost every human society. The older folks always believe that their generations were better than the emerging ones. And that in itself is a misconception. 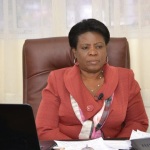 The emerging generations are not “bad” or “deviant” as some want to believe; they are simply different than their predecessors.

These folks who now think they can police behavior in our society, at some point in time, their generations too were viewed as “bad” in the eyes of those from the generations that preceded theirs.

So instead of badmouthing these young women for the way they are, thinking that we are or were better than them, we need to understand and embrace them as they are NOT going to change; they are not going to be like Darguste, Mezile, Racine and the rest of you conservative-minded Haitians want them to be.

These young women will be at the Carnival in their tank tops and boy shorts or “pantalon san fouk” doing their Dutty Wine. Those of you who don’t welcome or like the way they are, go ahead and arrest them to see if that is not going to cause an international outcry, enough to embarrass or shame the entire nation.

We act like we are living on an isolated and remote planet called Haiti all by ourselves. The world is forever connected more than ever before, so cultural protectionism is not the way to go as it will render us outdated and out of realm. Even Cuba is now trying to open up because these folks have finally come to the conclusion that cultural protectionism or isolationism is hurting them tremendously.