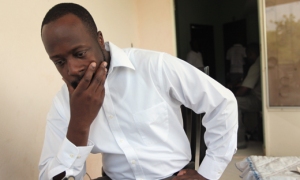 Some people could say, and rightly so, that I was too harsh on Wyclef when he had declared his candidacy for the presidency in Haiti. Yes, I was, and I had my personal reason for that. Most of us, and possibly including Wyclef, knew that he was not quite ready to lead the country at this very unique and unprecedented socio-political juncture in the country’s history. In spite of that, we had the same people -who were using Aristide as a political card for their own selfish political agendas only to turn their backs on him right in the middle of the raging sea, when the game got tough -on the forefront catapulting Wyclef again as a political card. I and many others said not this time.

Wyclef is a VALUABLE ammunition which we cannot afford seeing wasted. I was fiercely opposing the idea of having him then running for the presidency. In a sense, it was good sport for him to have tested the waters to have a sense of what he needs to prepare himself for the job. I had been writing extensively on the issue, and thank God it seems as though he has been listening, which is a great thing.

Wyclef has proven to us that he is a fighter, and he does not take defeat lightly. As a fighter on the battlefield, that’s what you do -you assess your defeats to find the causes, correct them, and engage the enemy again with a winning state of mind.

In this election cycle, Wyclef was facing two uphill battles –the legal battle and the perception battle. So he is working on making sure that in 2015, if he will have to endure battles, they are not the ones he just got defeated in.

The therapeutic way to cure one’s fear is to have him/her face it, not running away from it. I remember vividly just like it was yesterday that when I was a little boy growing up in Gonaives, Haiti, I was so afraid of “lamayot” that one day I came across one and literally defecated on me. My mother, who found out about the accident, felt embarrassed and decided to do something about it. One Sunday afternoon, she, who did not have any clinical psychology experience to know what she was doing, brought the “lamayot” in the house and had me face, touch and talk to him. And that was the end of my fear of “lamayots” until today. I say all this to say one thing: I want Wyclef to be back PREPARED in 2015 to face and overcome the challenge.

Wyclef is a golden bullet my generation has in its political arsenal which we cannot afford to see going into waste at this early stage in his political career. I do not know what the future has in the bank for him, but I want you to keep eyes on him. He will be back roaring stronger and louder than ever before.

17 comments on “WYCLEF: A GOLDEN BULLET NOT TO BE WASTED”