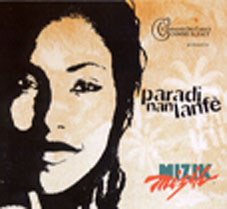 I wrote this review two years ago, but had never gotten to publish it. Enjoy the read…

This is one of the best albums issued in the year 2008. Don’t expect Paradi Nan Lanfe, the title of the album, to be a prototype of the latest album of Djakout Mizik, Zenglen or Nu Look in order for it to pass the test of musical greatness. Musically speaking, the album is rich and versatile, meaning everyone will “jwen.”

I think the crew did an excellent job to give us this amalgam of rhythms while still keeping it Mizik Mizik. Every time I get to listen to Paradi Nan Lanfe, the vibe coming out of the songs would take my spirit away and transpose it onto the mainland, our beloved Haiti Cherie. I hope it can have the same effect on you.

When you have guys like Shedley Abraham, one of the top drummers we have in our Konpa; Yves Abel; Gerald Kebreau; Andre Dejean, a living legend and one of the top trumpeters in the business, invited to bring their expertise for the realization of this colossal project, you cannot expect a mediocre piece of work. That is just impossible.

The first track on the CD is this song Mal by J.P. Argant, Eric Charles, Fabrice Rouzier, and Clement Belizaire. It is a tribute to Bernard and Jovany Blanc, Carlito Zounon, Veronique Valme, Wladimir Antoine, Jacques Roche, Luca Spinelli, Nadim Hippolyte, Jean-Pierre Riviere, Francois Latour and many more who have lost their lives during the macabre moments of organized insecurity our nation has lived in its recent history.

The lyrics are very current and address a very gruesome moment in our history. This song is basically a call to reason to those who are involved in the situation of insecurity, sapping the structures or our nation.

Rhythmically speaking, it is a song anyone can say to be going to cause damage at parties. It is very groovy, tasty and suave. When you listen to it, I want you to pay a careful attention to what Fabrice Rouzier on the keyboard, Shedley Abraham on the drums, Paul Hennegan on the tenor saxophone, John Normandin on the trombone and Andre Dejan on the trumpet are doing to bring us back in time to enjoy the beat of the tropics, something that is becoming a rarity these days in our Konpa.

Ranmase Konpa, track 2 on the CD, is a landmark that no one can dismiss for its colorfulness. In this song, M. B. Jacquet, Eric Charles, Fabrice Rouzier, and Clement Belizaire are honoring the legacy of the great Nemours Jean-Baptiste, the father of our Konpa Direk. They are thanking him for such a great musical heritage he has lived to leave behind for us to enjoy, especially at a time when almost everything of cultural capacity we used to enjoy is gone. They also are calling on everyone involved in our music –the musicians, the promoters, the producers, the music stores, the radio stations, the night clubs, and the fans -not to let it vanished, to give it the importance and care that it deserves.

At the very beginning and throughout the song, a good observer of Konpa Direk can feel the prints of Skah Shah and Tabou Combo in it, enhancing and spicing the tempo a little. This is a song one can say to have what it takes to be labeled “son lari ya.” I can envision already how the people are going bananas on the dance floor when at parties the DJs are spinning this song like crazy. It is not a summer song, but its jumpy tempo can make it pass for one.

Lavi Ka Bel is a very mellow and jazzy konpa song. It is the type one would want to listen to after a long day of hard work. Fabrice Rouzier and Eric Charles worked together on this one. Anyone carefully listening to this track cannot ignore the great contribution of Michael Benjamin on the acoustic guitar. He did a splendid job keeping the beat dry and jazzy with his acoustic guitar. These musicians (Yves Abel on the base, Shedley Abraham on the drums, Paul Hennegan on the tenor saxophone, John Normandin on the trombone, and Andre Dejean) delivered perfectly well to make the track what it is.

In this song, Fabrice and Eric basically want to communicate a message of unity, love and harmony. They envision a harmonious life where everyone is condemned to live together. And the things that can get us there are love and unity. To them, life could be more beautiful if we are willing to love and help one another.

Paradi Nan Lanfe -a creation of Fabrice Rouzier, Eric Charles, and Clement Belizaire -is a tribute to the great Haitian keyboardist, Ansyto Mercier, and all the patrons that used to and continue to frequent the Steak-Inn in Port-au-Prince.

First and foremost, this is a very smooth and well-assembled love song. The woman in the song has everything going for her –beauty and romance; no other women can come close to her in comparison. She really got it going on. She has an angelic beauty; however, beauty and romance alone are not the only ingredients needed for the singer’s relationship with her to be complete. Something of great significance is missing -love is absent. In spite of this huge flaw, he just can’t imagine living life without her. She is like a pain he just cannot afford to live without –a necessary evil, so to speak.

If you are looking for a hardcore Konpa, the “pike devan” type, you will find it in this one here –Pa Gen Moun Ki Gen Moun. Before I go any further in my opinion of this track, I have to particularly commend the keyboard of Fabrice Rouzier, the drums of Shedley Abraham, and the guitar of Clement Belizaire for their magnificent contributions to this track. Listening closely to this song, no one can dare discounting their remarkable contributions.

There is a lesson of morality that is being propagated throughout this song. It touches up on a very pertinent issue –frivolity in relationships, which the artist himself categorizes as foolishness. Some people feel like they have something to prove to the world; they have to have many mates to feel important, worthy or needed. According to Clement Belizaire, Eric Charles, and Fabrice Rouzier, that’s a misconception.

One individual is just one indivisible human being; therefore, having more than one mate is just an idiocy, considering the fact that he/she cannot be split to meet the needs of all the mates at any given time. Somehow, neither one of the mates, including the one claimed to be the official one, will be fully satisfied. So ladies and gentlemen, what these guys from Mizik Mizik are saying is that if you can’t be the one and only one in the person’s life, why opting for a lesser position?

This is a very important message to spread to help strengthening the institution of family, a microcosm of the big Haitian society. We have too many households without a father these days in our existence as a people. And, for the most part, the main reason behind that phenomenon is found in the very pertinent issue these guys are exposing in this song –frivolous and concubinary relationships.

Gilbert Ravix, Eric Charles, and Fabrice Rouzier put their talents together to bring us Chavire, a very smooth love song with a little spice of Zouk to it. This song is about a man who is feeling a lady, but can’t find the words to express that feeling. He would get tongue-tied each time he finds himself in the position to affirm his feeling to her.

Some critics may argue that Mizik Mizik’s originality is nowhere to be found in this song, and that it is too close to what we are accustomed to from Alan Cave. I think that would be a fair criticism; I find Alan Cave’s prints to be too blatant all over the song. Whether or not it is a plus to Mizik Mizik is to be determined. The reactions from the fans or the impact it is going to have on the partygoers will determine whether the rapprochement or closeness serves its purpose.

I don’t think Fabrice Rouzier, Eric Charles and the entire Mizik Mizik crew could have done any better than the way they delivered on this track Nou La. This is one of my favorites from the whole album. The lyrics are blazing hot. The lead vocalist says something that makes me nod in approval. He says that some people enter your life and change it completely for the better, a phenomenon no scientist can explain.

This song is basically about the same thing we talked about earlier in this review –morality and values. The man in this song wants to give his woman the guarantee she needs to have in his relationship with her. He said, “Cherie, we are in this for the long haul -to get engaged and get married. We have been through a lot, being the main reason why we must swear to never let go of each other. Some critics would argue that we are not made for each other, but we know what we need and what we make sail for. If I were to choose between you and life, without any doubt, I would choose you ‘a l’infini.’ If we are married, there will be no divorce.” Those are some strong words, enough to have a woman going goo-goo gaga.

Clement Belizaire and this guy Gerald Kebreau, the base player from the group T-Vice, killed it. Fantastic job, guys!!! I have to specially give it to Kebreau for having the astuteness and audacity to make his instrument stand out so loud and clear, something that is not easy to do. Often time, the sound of the base guitar gets camouflaged and baffled in the mix. When you listen to this song, I want you to listen closely to see what he is doing on the base guitar.

What I personally admire about these Mizik Mizik guys is that, unlike many in the Konpa music business, they don’t do music for the fun of it; they don’t have time to sit in the studio producing garbage. They take their times to put out a piece of work which everyone can relate to. That does not come cheap; it comes with hard work and great talents.

I recommend Paradi Nan Lanfe to all lovers of great music. This album is so rich in rhythms and lyrics that everyone will find their little portion for their own delectation. And its richness could have not been possible had it not been for the magic touches of these invited artits -Shedley Abraham, Yves Abel, Gerald Kebreau, Michael Benjamin, Calo Vieux, Richard Cave, Michael Guirand, Jude Jean, Paul Hennegan, John Normandin, and Andre Dejean -whose contributions are priceless and immeasurable. I am not surprised by the good quality of this product. After all, it is from the Mizik Mizik crew; therefore, could anyone dare expecting anything less? I don’t think so.

I hope to have done my best to give you an idea as to what to expect from Paradi Nan Lanfe. This review can only satisfy part of your curiosity. You still need to go buy the CD to not only monetarily support the band, but also to better and fully enjoy the fun there is in it to enjoy. It is worth the investment; you will not regret it.